There was an article posted where a father bribed his 14-year-old daughter $200 to  stay off facebook for five months. I have a hard time believing that it would come to that to get his child off facebook. It does not say if she had much of a problem on facebook in the article written by Salvador Rodriquez. Even if your child had that much of a problem on facebook I do not believe that using a bribe would be a good idea. The father’s name is Paul Baier and he posted the following contract on his blog. 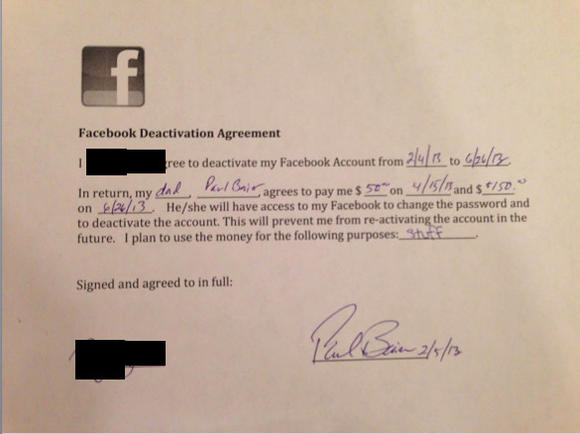 Now bribing your child to do things that they should do in the first place is one of the worst things to do as a parent. You are teaching your child that bribery is OK and how you expect her to act, being paid to obey her parents. How is this a good message? Yes, you can still pay your children to do small housework chores, like mowing the lawn, mopping the floor, etc. There is no comparison to the small housework chores and bribing your own spawn. Bribery is terrible, so why are you attempting to teach your child that bribery is OK? Yes, the situation is different from bribing a political candidate, but it is still the same concept you are teaching her. I think this father needs to sit down and reevaluate what he is doing as a father, consider the ramifications of his actions. Yes, it will probably get his daughter off facebook for five months, but she will go right back onto the billion user site immediately afterwards. My question to Paul Baier is this: in the long run, is it worth it?