I ventured to the Wimbledon tennis arena today and noticed something that confused me; the street markings are quite odd. They are nothing like in the United States.

Here is an example: 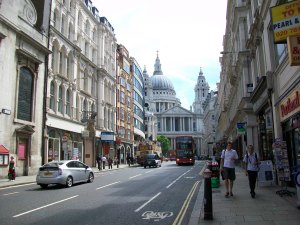 The double yellow stripes on the side of the road do not make sense to me. How do drivers know when a street is one-way or two-way? All the streets are marked with dashed white lines in the middle of the road on two, three and four lane roads. I have yet to see signs on the road stating which is which. The only signs I’ve seen are one-way signs.

I will probably never be able to drive the streets of London because of their confusing nature.