Every American knows that July 4 is the day we declared our independence from Great Britain. This year I was unable to be in the United States for our wonderful Independence Day because I am in England. Instead of sticking around England, I chose to travel to Paris, France; where we received assistance in gaining our independence.

Upon arrival in Paris, I was shocked at the level of filth in the streets. I had heard that Paris was a dirty city, but I never imagined that it was that filthy. I couldn’t believe that I saw hobos sleeping on the bridge and the sheer amount of trash on the ground, especially in the touristy areas. That was by far the most shocking part of the day trip.

I went with a few other people in our class and made a day trip out of it. We travelled through another tour company to the Eiffel Tower, did a cruise around the river and visited the Louvre.

We went up to the second floor of the Eiffel Tower and had an amazing view. It felt around the same height as the Empire State Building, but I am unsure if that is accurate. 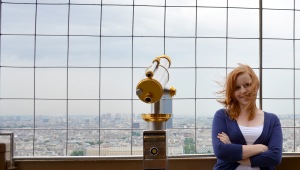 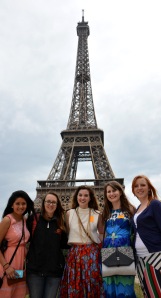 Next we went on a cruise on the Seine river. We had beautiful views of Notre Dame, old bridges and architecture, and the Eiffel Tower.

Lastly, our group travelled to the Louvre where the Mona Lisa is on display. When I saw her, I was actually quite disappointed. I expected her to be a bit larger and impressive, since she is so famous. In fact, I saw numerous other Leonardo Da Vinci paintings that were more impressive and beautiful. I was quite impressed with the Aphrodite statue though, even taking a selfie with her.

Overall, my trip to Paris is something I will never forget. I can now say that I’ve seen the Eiffel Tower, Notre Dame, the Mona Lisa and Aphrodite statue.