This past Sunday I did one of the most fulfilling things in my 21 years; a music festival called Wireless. Wireless is a three day music event where multiple bands across the world come and perform. I went on the final day, July 6, to see one of my favorite childhood bands perform, Outkast. There were numerous other acts among Salt n’ Pepa, Paul Newman, J. Cole, Ellie Goulding and Bruno Mars; but I went for Outkast.

Outkast went on right before Bruno Mars, the headliner, performed. They performed some of the biggest hits like Hey Ya, Roses, Ms. Jackson and So Fresh, So Clean. I was able to record a portion of my favorite song, Hey Ya, during the concert.

Next Bruno Mars came on and he gave such a wonderful performance. I am not the biggest fan of Bruno because I feel like all of his music is about the same thing, but I grew to appreciate him more after seeing him live. He is an amazing performer, keeping the audience entertained throughout. He dances, does his silly moves like in his music videos and much more.

Before Bruno and Outkast came on, it was Ellie Goulding’s spotlight. I enjoy her music, but have never been the biggest fan, just like with Bruno. It seems to be a trend, seeing someone perform live really changes your view on the artist. Watching and listening to Ellie Goulding was an entirely different animal. She was an amazing performer, but a bit weird at times as well.

Overall, this concert was amazing and I am so grateful I was able to attend it. Whenever Bruno was coming on to perform it started to pour. Right before he dropped his curtain, a beautiful rainbow appeared beyond the stage. 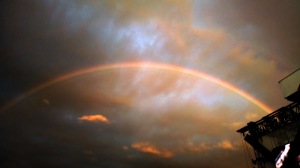